There are several methods that the body uses to protect itself against irritants and foreign bodies. Sneezing, coughing, and diarrhea are just some of the natural methods by which the body expels any irritants, toxins or foreign objects that are responsible for a health condition. Vomiting also known as emesis is the process by which the stomach forcibly empties itself of all its contents through the mouth. Vomiting is a violent act and can occur in everyone from babies to adults. It is not an illness in itself but a symptom of some other condition or disease. 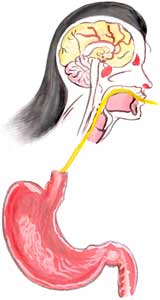 Vomiting is a complex reflex action in response to signals received from either the stomach, intestines, mouth, inner ear, the bloodstream (if its been infected) and even the brain. The action of vomiting includes a strong downward contraction of the diaphragm muscles along with a tightening of the abdominal muscles and opening of the gastro esophageal sphincter. All this leads to the expulsion of the contents of the stomach out of the mouth.

Vomiting is a symptom of some other illness or disease affecting the body. The act of vomiting is at times preceded by nausea, but this is not always the case. Even after all the food has been expelled from the stomach, vomiting can continue. This is referred to as dry heaves.

Frequent bouts of vomiting can lead to severe dehydration. The affected person may have dry or cracked lips, a dry mouth, sunken eyes, and even rapid breathing. Urination may be infrequent, but there can be an increased feeling of thirst. Other symptoms associated with vomiting include weakness, dizziness and/or lightheadedness. Depending on the underlying cause of the vomiting, there may be other symptoms as well such as:

In some cases, symptoms that appear along with vomiting could indicate a life-threatening condition or illness that requires immediate medical attention. Keep a lookout for the following warning symptoms if they accompany vomiting:

Vomiting can be caused due to a number of reasons. These include:

Irrespective of the causes, there are some cures for vomiting that offer immediate relief. The effectiveness of any home treatment for vomiting will quite naturally depends on the underlying cause, and the severity of the vomiting. Do keep in mind that suppressing vomiting is inadvisable, as this is a natural mechanism to rid your body of any toxins, impurities or germs that are responsible for the problem. Treatment should instead aim to control and restrict the effects of vomiting like fluid loss and dehydration. If you are vomiting:

Some popular home remedies for vomiting include drinking coconut water or lime juice to rehydrate and soothe the stomach. Other liquids such as mint tea, peppermint tea, ginger tea, ginger ale, fresh fruit and vegetable juices can also help. Make sure you sip slowly and do not drink too much at a time. Avoid all solid foods until the vomiting abates for at least six hours at a stretch. Powdered cinnamon added to water and boiled can be drunk to relieve symptoms of vomiting. Drinking water mixed with equal amounts of honey and apple cider vinegar can help to prevent vomiting as well.

Another home remedy to stop vomiting is drinking a combination of activated charcoal and water. Stir well till the particles of charcoal settle down and drink. This is especially useful if vomiting has been caused by a stomach upset or food poisoning. Roasting cardamom seeds and powdering them before mixing with a teaspoon of honey or sucking on a sugar cube with a drop of peppermint oil are other effective home remedies for throwing up.

Once vomiting begins, the first thing to do is avoid any solid foods. This is not really difficult to do as vomiting is usually accompanied by a complete loss of appetite. The next step to take is to increase your liquid intake to prevent dehydration. If vomiting persists for more than 24 hours and no liquids can be retained, it is recommended that you have an electrolyte solution to maintain the balance in the body. If you cannot get your hands on a commercially available solution, you can prepare your own electrolyte solution by mixing 8 teaspoons of sugar and 1 teaspoon of salt in one-quart of water.

Clear liquids such as water, clear soups, soda, herbal teas, and ginger ale can help calm the stomach and keep you hydrated. Ice chips, gelatin, and juices are also handy when suffering from nausea and vomiting.

Once the vomiting has stopped you can slowly introduce solid foods back into your diet in the form of clear broths, crackers and dry toast. Children can start with bananas, rice, applesauce, and toast. At this point of time in your recovery, avoid multi-grain and high fiber foods, as they may be a little difficult to digest. Boiled potatoes, plain pasta, baked chicken, and white rice are easier to eat and retain. As you start to feel better, add cooked vegetables and meats back into your diet, but avoid using too much oil or spices. Dairy products should be avoided for a little longer as they can aggravate the stomach lining. Eat small meals throughout the day and avoid heavy, over-processed and fatty foods for sometime after your vomiting stops.

Many people prefer to treat nausea and vomiting with alternative treatments such as homeopathy, herbal supplements, aromatherapy, and acupressure. Make sure you consult with your doctor before starting any new treatment or alternatives, particularly if there are other symptoms present.