According to ayurveda, diabetes is a metabolic kapha type of disorder in which diminished functioning of agni leads to a tendency toward high blood sugar. (Ayurveda recognizes 24 formsof the disease commonly classified under Prameha – 4 are dueto Vata dosha, 6 are due to Pitta dosha, and 10 are caused by Kapha dosha. The main causes of these diseases are fat, urine, and Kapha buildups due to foods, liquids, lifestyle and others.)

Ayurvedic practitioners attack diabetes using a multiprong approach. First, they address diet modification, eliminating sugar and simple carbohydrates, and emphasizing complex carbohydrates. Protein is limited, since excessive intake can damage the kidneys. Fat is also limited because there is often a deficiency of pancreatic enzymes, making fat digestion difficult. Since many diabetics have autoantibodies, a cleansing program is instituted. Panchakarma is typically used for this purpose. This begins with herbal massages and an herbal steam sauna, followed by fasting to cleanse the body. This is followed by an herbal purge for the liver, pancreas, and spleen. Colon therapy is next, first to cleanse the digestive tract and then to reconstitute the system.

Diabetes is a wide spread chronic disease of which 80-90% are Type 2 Diabetes mellitus. Beta Cells of the Pancreas Glands is responsible for Insulin which is essential for proper utilisation of carbohydrates. If insulin is absent, the carbohydrates is not utilised and these appear in the blood in the form of Glucose. Main problem with Diabetes is that it is very difficult to diagnose in the early stages. The main symptoms are: excessive urine formation & frequent urination, burning of palms and soles, increased hunger, excessive thirst, sweet taste to mouth, weight loss, blurry vision, wounds that take time to heal, skin Infections, unexplained extreme fatigue etc. Poorly managed diabetes can lead to Heart attacks, Strokes, Blindness, Nerve damage, Impotence etc.

According to Ayurveda, diabetes is not just lack of insulin. Its most probable cause is poor maintenance of your body which can be improved through Panchakarma treatments like hebal purge for the liver, pancreas, spleen, colon and the digestive tract and herbal massages, modification of diet and exercise, Yoga and breathing exercise.

Recently published reports suggest that around 51 million people in India belonging to different age groups have been affected by Type 2 Diabetes mellitus in 2010.

Disadvantage with insulin supplementation is that the dosage of insulin needed steadily increases with passage of time.

Oral anti- diabetics is said to have serious side effects which includes hepatotoxicity and renal damage. Considering the vast number of complications and ailments that diabetes brings along, this becomes a serious problem and one that requires constant attention. After so many years of research put into finding a cure or a permanent relief, we have not mastered it yet. 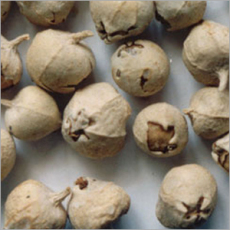 There seems to be a ray of hope from our traditional medicine. The plant, mainly its fruit in question has been proved to decrease alarmingly high levels of blood glucose with the systematic and regular use of the shrub.
Withania coagulans commonly known as PANEER DODA/DODI is a shrub belonging to the family soalnaecae.

As the name suggests the plant has been used traditonally for coagulation of milk and is called the Indian rennet. Various other parts of the plant have been put to medicinal uses by the traditional Indian system of medicine. One prominent use is of the dried berries of the plant which has long been used for lowering blood sugar levels. With the insight from systematic research, the mechanism of action of these fruits in  their anti diabetic activity has been realized and has been proved to be effective experimentally.

Hypoglycemic Activity Of Withania Coagulans (Paneer Doda)
Diabetes is a chronic disease which affects all groups of people of different sections of the society. Modern, hectic lifestyle is contributing to increasing number of diabetics, some even in the age group of 30 to 40 years. The reasons are many and include increased tension, faulty eating habits with increasing dependence of junk foods. Smoking and increased use of tobacco, pollution, hereditary causes, can be inducted as the other factors which are increasing the incidence of diabetes in the young.

The use of alternative and herbal treatment of Diabetes is increasing and new research has given promising results with many herbs. One such herb which has been studied is Withania coagulans (Paneer Doda) which has been found to have profound hypoglycemic activity when administered to streptozotocin induced diabetic rats. Withania coagulans (Paneer Doda) has been used since time immemorial in Indian Ayurvedic medicines.

The method of use is very simple. You need to drop 10 of those seed like flowers in a glass of water overnight. Filter the water through a sieve and drink it first thing in the morning.  Continue this treatment and control of blood sugar is achieved in a fortnight.

Other Benefits
Anti inflammatory (a substance used to relieve swelling, pain and other symptoms of inflammation) and anti-oxidant(a substance that reduces the damage caused by oxidation, such as the harm caused by free radicals) activity
Hypolipidemic activity (promoting the reduction of lipid concentrations in the serum)
Hepatoprotective activity (substance that helps in protecting the liver and maintains its general well being)
Helps in relieving stress
Works as a rasayan i.e. a substance that helps in preventing early aging and rejuvenates whole body to provide youth
It is considered as one of the most commonly used herb in relieving hypertension with excellent results.
It has also been found to be an excellent supplement that helps in proving strength to heart muscles and keeps heart working normal
How to use 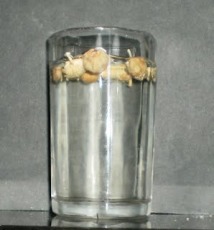 The method of use is very simple

You need to drop 10-15 of those seed like flowers in a glass(use glass tumbler only) of water overnight.
Filter the water through a sieve and drink it first thing in the morning. 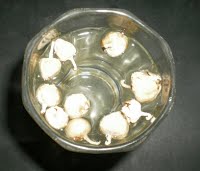