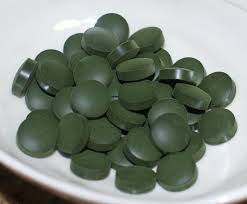 Spirulina is a simple one-celled microscopic blue-green algae with the scientific name Arthrospira platensis. Under a microscope, spirulina appears as long, thin, blue-green spiral threads. The odor and taste of spirulina is similar to seaweed.

Spirulina can be found in many freshwater environments, including ponds, lakes, and rivers. It thrives best under pesticide-free conditions with plenty of sunlight and moderate temperature levels, but it is also highly adaptable, surviving even in extreme conditions. More than 25,000 species of algae live everywhere – in water, in soils, on rocks, on plants. They range in size from a single cell to giant kelp over 150 feet long. Macroalgae are large like seaweeds. Microalgae are microscopic. Ocean microalgae, called phytoplankton, are the base of the ocean food web. Spirulina is often deemed the most nutritionally complete of all food supplements, containing a rich supply of many important nutrients, including protein, complex carbohydrates, iron, and vitamins A, K, and B complex. It also has a high supply of carotenoids such as beta carotene and yellow xanthophylls which have antioxidant properties. It is also rich in chlorophyll, fatty and nucleic acids, and lipids. Thus, spirulina has countless uses as a supplement for maintaining good health and for preventing diseases.

Spirulina is the richest beta carotene food, with a full spectrum of ten mixed carotenoids. About half are orange carotenes: alpha, beta and gamma and half are yellow xanthophylls. They work synergistically at different sites in our body to enhance antioxidant protection. Twenty years of research proves eating beta carotene rich fruits and vegetables gives us real anti-cancer protection. Synthetic beta carotene has not always shown these benefits. Research in Israel showed natural beta carotene from algae was far more effective. Natural is better assimilated and contains the key 9-cis isomer, lacking in synthetic. As suspected, natural carotenoids in algae and vegetables have the most antioxidant and anti-cancer power.

Iron is essential to build a strong system, yet is the most common mineral deficiency. Spirulina is rich in iron, magnesium and trace minerals, and is easier to absorb than iron supplements.

Spirulina is the highest source of B-12, essential for healthy nerves and tissue, especially for vegetarians. Having said that, there does seem to be lots of evidence that the Vit B12 is in a slightly different form than that which can easily be absorbed by Humans, so it is debatable how much good this B12 will do you. It seems to be only the B12 there is this absorption issue with though, and the rest of the nutrients do seem to be bio-actively available to the body.

About 60% of spirulina’s dry weight is protein, which is essential for growth and cell regeneration. It is a good replacement for fatty and cholesterol-rich meat and dairy products in one’s diet. Every 10 grams of spirulina can supply up to 70% of the minimum daily requirements for iron, and about three to four times of minimum daily requirements for vitamins A (in the form of beta carotene), B complex, D,and K. By itself, it does not contain vitamin C, but it helps maintain this vitamin’s potency.

Spirulina is rich in gamma-linolenic acid or GLA, a compound found in breast milk that helps develop healthier babies. Moreover, with its high digestibility, spirulina has been proven to fight malnutrition in impoverished communities by helping the body absorb nutrients when it has lost its ability to absorb normal forms of food.

Another health benefit of spirulina is that it stimulates beneficial flora like lactobacillus and bifidobacteria in your digestive tract to promote healthy digestion and proper bowel function. It acts as a natural cleanser by eliminating mercury and other deadly toxins commonly ingested by the body.

Spirulina also increases stamina and immunity levels in athletes, and its high protein content helps build muscle mass. At the same time, it can curb hunger that may develop during the most demanding training routines. Thus, it indirectly acts as an effective way to maintain an athlete’s ideal body weight.

As well as beta carotene, Spirulina contains other nutrients such as iron, manganese, zinc, copper, selenium, and chromium. These nutrients help fight free radicals, cell-damaging molecules absorbed by the body through pollution, poor diet, injury, or stress. By removing free radicals, the nutrients help the immune system fight cancer and cellular degeneration. In some findings, spirulina has helped reduce oral cancer tumors in laboratory rats, and may thus provide a big medical breakthrough in cancer treatment.

Spirulina’s ability to reduce the bad cholesterol LDL in the body helps prevent the onset of cardiovascular diseases, such as hardening of the arteries and strokes. It also helps lower blood pressure. While not clinically proven, spirulina may also protect against allergic reactions and liver infection.

Research confirms Spirulina promotes digestion and bowel function. It suppresses bad bacteria like e-coli and Candida yeast and stimulates beneficial flora like lactobacillus and bifidobacteria. Healthy flora is the foundation of good health and it increases absorption of nutrients from the foods we eat, and helps protect against infection. Spirulina builds healthy lactobacillus, aiding assimilation and elimination and relieving constipation.

In 1994, a Russian Patent was awarded for spirulina as a medical food to reduce allergic reactions from radiation sickness. 270 Children of Chernobyl consuming 5 grams a day for 45 days (donated by Earthrise Farms), lowered radionucleides by 50%, and normalized allergic sensitivities. Today we are subject to an onslaught of toxic chemicals in our air, water, food and drugs. Our bodies need to continually eliminate these accumulated toxins. Spirulina has a completely unique combination of phytonutrients – including chlorophyll, phycocyanin and polysaccharides, that can help cleanse our bodies.