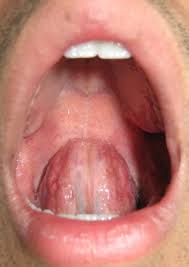 Kechari Mudra is considered the king among mudras. In Sanskrit, the word ‘Kha’ indicates Brahman or the Supreme Reality and ‘Chara’ means to move. Kechari Mudra helps the practitioner to move in the blissful infinite consciousness of Brahman. Kechari is an advanced practice that enables the yogi to reach higher states of consciousness. Kechari Mudra is mentioned in Gheranda Samhita, Hatha Yoga Pradeepika and various other yogic and tantric texts.

Kechari mudra is a yoga practice where the tongue is rolled up to touch the soft palate. This is an advanced practice and the yogi is said to overcome thirst, hunger, decay and death by this practice. For most people this needs prolonged effort. The tongue can be rolled up to touch the upper palate. Initially it may be able to touch only the hard palate. With practice, it can go further behind to touch the soft palate. Later it can touch the uluva at the back of the throat. With practice, the tongue can go beyond the uluva and enters the nasal cavity to stimulate certain points inside the cavity. This may take months or years of practice. Eventually the yogi is able to taste the nectar (or amrit) which flows from the roof of the nasal cavity. This nectar energizes the body and helps to overcome the need for thirst and food.

There are two ways to perform Kechari mudra, with or without cutting the frenum membrane under the tongue. In the Raja Yoga method, cutting the frenum is not advised. Instead, with certain practices, the tongue can be made long enough to enter the nasal cavity. In Hatha Yoga method, the frenum membrane below the tongue is cut bit by bit to extend the tongue. This enables the tongue to easily pass into the nasal cavity The Hatha Yoga technique is only for advanced yogis and should be done only under the guidance of a yogi, who is an expert in Kechari Mudra.
How to do Kechari Mudra (The Tongue Lock)?

Sit in a comfortable position. Close the mouth and roll the tongue up to touch the upper palate. See how far back it can go. Initially it may touch the hard palate. Some may be able to touch the soft palate with the first try itself. Keep the tongue there for as long as comfortable. Initially one may be able to keep it for less than a minute. When the tongue starts to pain, release the tongue and bring it back to normal position. Rest for some time and try again. This process can be tried even when you are engaged in light activities while sitting and walking.
The above process should be continued and one will be able to hold the tongue on the palate for a prolonged duration.
With practice, the tongue will be able to go further back. Some day it will touch the uluva at the back of the throat. With further practice, the tongue will be able to negotiate the uluva and go behind it.
Next the tongue enters the nasal cavity. One should be able to hold it there for at least few minutes. One can breathe normally during this process. As you progress, the breathing rate will go down to 5 – 8 breaths per minute or even lower.
Once inside the nasal cavity, the tongue can stimulate certain nerve centers that are connected to the brain. It is said that constant churning of the tongue produces a liquid that emanates from the roof of the cavity. The taste of the liquid varies. Initially, it may be salty which has o be spit out. Later the juice turns sweet and finally ‘amrit’ or nectar is produced. This nectar is consumed by the yogi and it nourishes the body.

For advanced practitioners, cutting of the frenum membrane is advised. In the Gheranda Samhita, it is said that the frenum can be cut, bit by bit. The tongue is also drawn out and made elongated by applying butter or ghee. This is continued till the tongue is long enough to reach the eye brow center. This requires the guidance from an expert yogi who is accomplished in the art of Kechari Vidya. Do not attempt it by yourself.

Kechari can be practiced in conjunction with other yoga practices like Ujjayi pranayama, Sambhavi mudra and other meditation techniques.
Benefits of Kechari Mudra (The Tongue Lock)

1. Gheranda Samhita says that by performing Kechari Mudra, the yogi overcomes fainting, laziness, thirst and hunger.
2. The yogi doesn’t suffer from disease, decay and death. The immune system becomes very strong. The body becomes divine.
3. In the Gheranda Samhita as well as in the Hatha Yoga Pradeepika, it is said that such a yogi becomes immune to poison and snake bites.
4. Kechari mudra helps the practitioner to attain Samadhi or the super-conscious state.
5. The secretions when consumed give great benefits to the body.
Kechari Mudra is also used by yogis to do astral travelling. The mudra helps the yogi to detach the astral body from the physical body and travel in the astral planes.
6. Kechari Mudra is considered the king among all the mudras and is given great importance in all the ancient yogic texts.

1.This mudra frees the mind of anger, ego, attachment, desire, aversion and hatred.
2.It increases energy and vitality.
3.If practiced regularly, it is believed to give ones voice a pleasant tone.
4.Regular practice also ensures brightness, attractiveness and shinning of face.